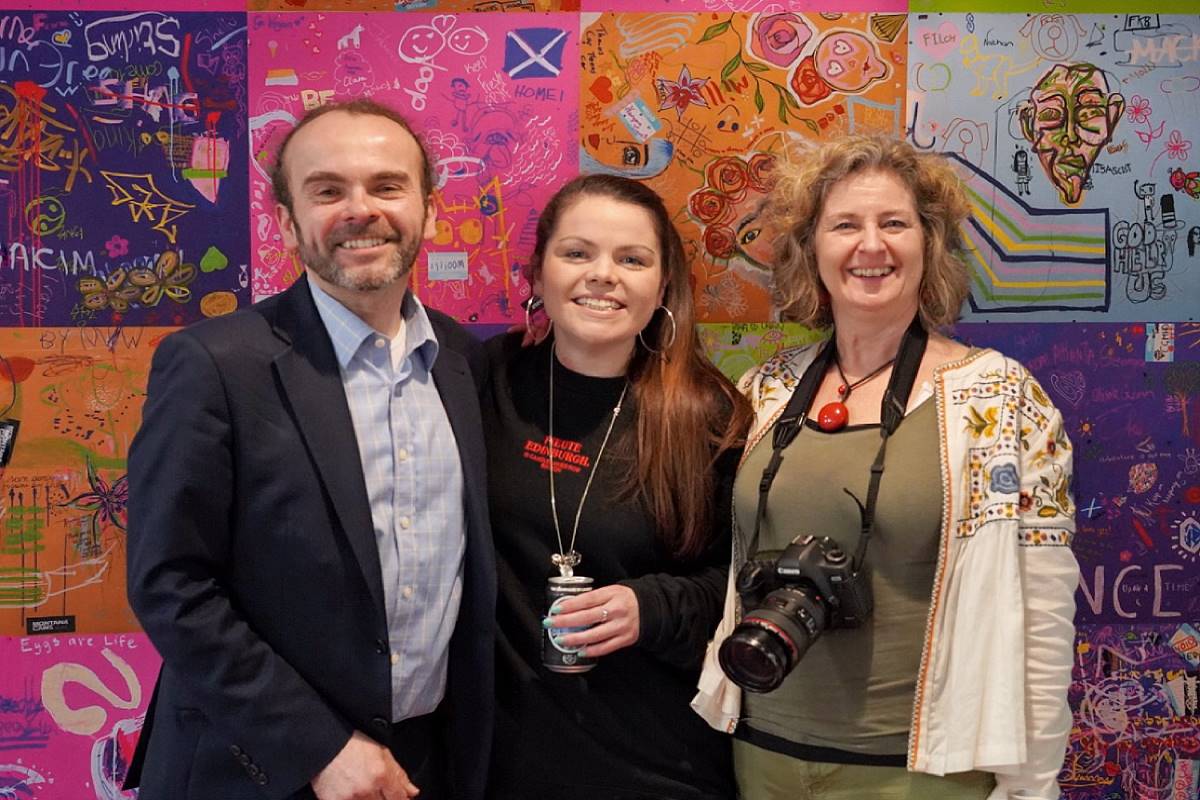 Business leaders and the creative community have joined forces to come up with fresh ideas to improve Stirling’s city centre experience.

Go Forth Stirling, the city’s Business Improvement District, and Creative Stirling organised `Animating our Streets: Opportunities for Stirling’ to explore ways businesses and the creative industries can work together to create a vibrant city centre.

Plans include a Mural Trail around Stirling and a repeat of the successful 2018 `Animating Our Streets’ arts festival later this year.

More than 50 people, including business owners, council officials, artists, BID board members and students, were at the meeting opened by Go Forth Stirling Director Jon Walton.

“I am delighted to be in the heart of the creative community and to see so many faces from across the city for this collaborative event.

“Retail is changing, there are a lot of challenges before us and we have to change and adapt – we need to create theatre and entertainment in the city centre more so now than ever before.

“What made our `Animating Our Streets’ festival such a success was the way it encouraged people to engage with the city centre.

“It’s all about collaborating and doing things together. We can’t sit back and wait for it to happen – we need to create these events and points of difference in Stirling.”

Artist Mia McGregor spoke about the success of `Animating Our Streets’, Stirling’s first Street Art festival, which centred around her interactive Cube art installations based around the city for people to draw and write on.

Images of the eight 1m high by 1m wide cubes have since been printed to create a huge mural which was unveiled at the event and has pride of place at the King Street hub.

“The festival – organised in collaboration with Jon Walton of Go Forth Stirling and Janie Meikle Bland of Picture the Possible – was a great success thanks to the traders who got involved and the volunteers who came on board to bring the streets to life.

“We now want to engage with shop owners and landowners who have walls so we can bring more street art to the city.

“We also want to hear from people involved in the food and drinks and music communities so we can grow the street festival, create a real vibe about Stirling and showcase the city’s creative talents.

“If you are a wall owner or a creative who wants to get involved please get in touch as we would love to grow our community.”

“I’m very excited about the prospect of bringing business and creative people together into one physical space when Go Forth Stirling move into the King Street Hub and see creativity as a driver for growth.

“There are so many opportunities for Stirling and lots of scope for creating a Mural Trail.

“We have the capacity to make Stirling City Centre look really amazing if we can do it together.”

Meanwhile guest speaker Phil Prentice, Chief Officer of Scotland’s Towns Partnership, told the audience Stirling is already ahead of the curve when it comes to enhancing the city thanks to the partnership strategies now underway.

“Every part of Scotland has a unique story to tell and what makes the difference is how we differentiate ourselves as a small city.

“Town centres are very complicated and with retail shrinking, we need to put unique and different experiences into the town centre.

“You are already ahead of the trajectory on this and it’s about celebrating partnerships and everybody coming together because town centres are going to become very different places.

“Stirling is a fantastic small city with a lot of assets to play with – the University, the river, Stirling Castle, the heritage – just don’t forget what you have got in front of you.”

Ruth Currie, of Creative Stirling’s Place Partnership Project, urged those attending to submit their ideas regarding possibilities for a creative collaboration with business via an online platform.

She said such feedback would be used to inform and take forward new creative opportunities in collaboration with Go Forth Stirling.

Go Forth Stirling’s Jon Walton is hoping for some interesting new ideas to emerge.

“The event went well and I was pleased so many people from the creative and business communities came to find out about working and partnering together.

“I’m hoping for some gold among the ideas put forward which we can follow up on.

“I’m also looking forward to getting started on the legacy of our first festival which will be a Mural Trail and a bigger and better `Animating Our Streets’ event.”

Published by Blackburn Communications on February 25 2019.

As featured in The Stirling Observer, Scottish Field and What’s On Stirling.