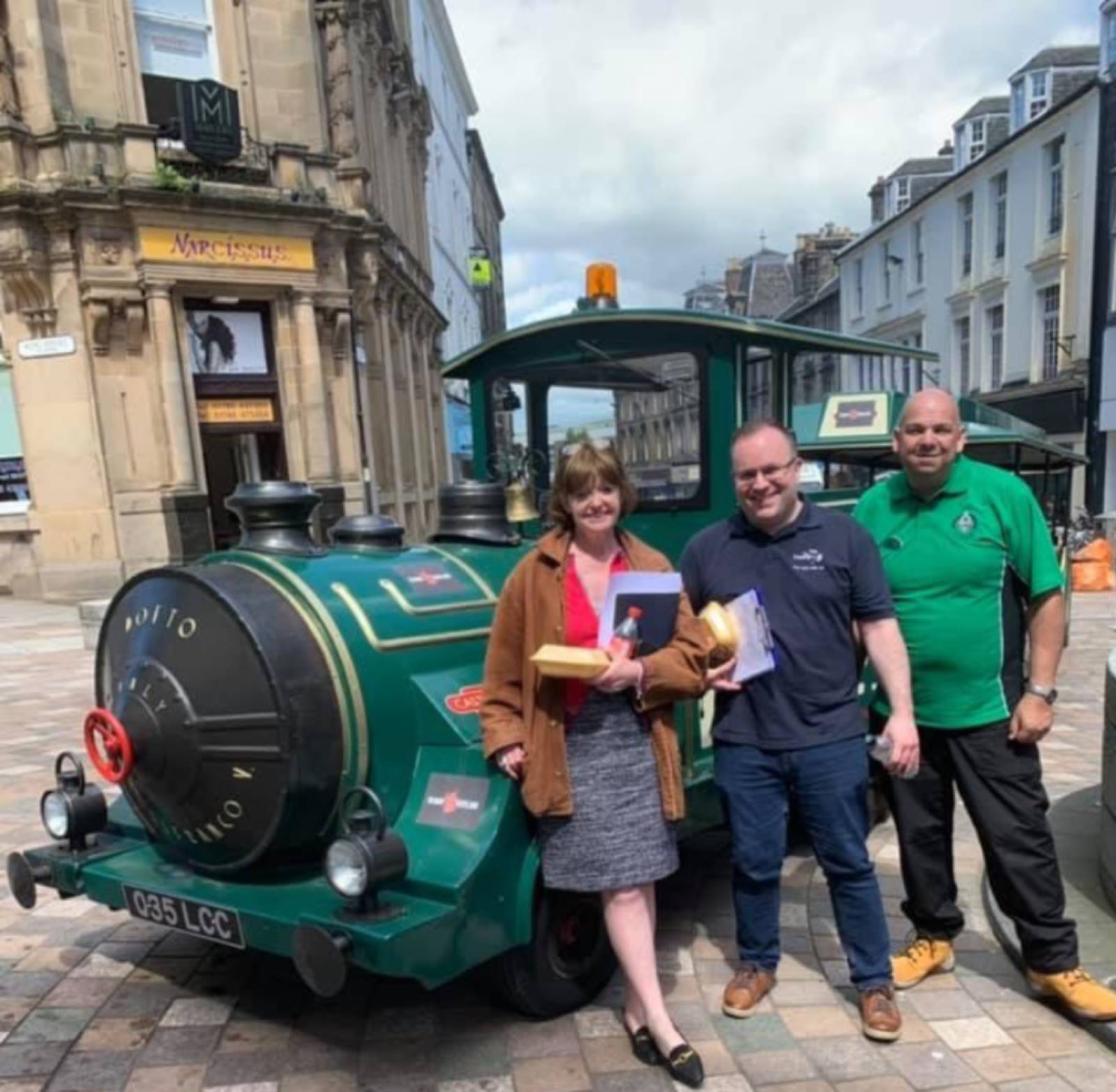 Stirling’s popular Landtrain begins a new and extended route this weekend covering more of the city and its attractions.

From Saturday July 27, the train will travel from the city centre to Forthside and back giving visitors and residents the chance to see more of Stirling.

Go Forth Stirling Business Improvement District, which runs the Landtrain, is also launching a new hop on/hop off pass which allows users to make as many journeys as they like throughout the day.

“The Landtrain route has been extended following consultation with local businesses.

We’re confident the new route and day pass will be a great enhancement to the city encouraging people to hop on and off the Landtrain and explore Stirling during the summer.”

Meanwhile, Central FM will again be presenting their daytime show from the Landtrain on Monday July 29.

The move follows a successful initiative earlier this month when Central FM presenter Brian Woolfson, known to his fans as Woolfy, broadcast live from the train in a campaign aimed at promoting Stirling and its attractions.

This time, DJ Tony McQue will host his 10am-2pm Daytime show from the train interviewing local business owners and residents live on air as he travels around the city.

The first Central FM broadcast was great fun and Woolfy was fantastic chatting away to traders, shoppers, tourists and children.

“He was a real hit and we’re delighted to be doing it all again on Monday.”

The broadcast will feature prize giveaways and the chance for traders to talk about their businesses and everything Stirling has to offer.

This is a campaign aimed at promoting Stirling and reminding people what a fabulous destination it is.

People can hop on and off the Landtrain and use it to get around the city which has a fantastic mixture of high street and independent shops, lots of leisure activities and great restaurants.”

The extended Landtrain route will now take around 40 minutes from start to finish and there’s a special introductory offer of just £2 for the day pass.

The train is free for children under five and will be running every day, between 10am and 5pm, throughout the rest of the school summer holidays.

Passengers can now join the train at Forthside Car Park, near the Vue Cinema, or get on board at various stops along the route.

The Landtrain travels along Forthside Way towards the city centre with stops at Barnton Street, King Street, St John Street (set down only), the Castle Esplanade, Broad Street and Station Road before heading back to Forthside.

Further improvement plans for the Landtrain include a GPS Commentary system highlighting landmarks and places of interest around the route and a map for passengers.

Part of the five-year Go Forth Stirling Business Plan, the Landtrain was introduced during Easter 2018 with the aim of operating through the main tourism months and providing a key link between traders and the Castle.

A dedicated Facebook page has been set up for the attraction with information about running times and more.

Published by Blackburn Communications on July 25, 2019.

As featured in What’s On Stirling, Primary Times and Step Business News.